Odd planet, so far from its star…

An international team led by Université de Montréal researchers has discovered and photographed a new planet 155 light years from our solar system.

A gas giant has been added to the short list of exoplanets discovered through direct imaging. It is located around GU Psc, a star three times less massive than the Sun and located in the constellation Pisces. The international research team, led by Marie-Ève Naud, a PhD student in the Department of Physics at the Université de Montréal, was able to find this planet by combining observations from the the Gemini Observatories, the Observatoire Mont-Mégantic (OMM), the Canada-France-Hawaii Telescope (CFHT) and the W.M. Keck Observatory.

A distant planet that can be studied in detail

GU Psc b is around 2,000 times the Earth-Sun distance from its star, a record among exoplanets. Given this distance, it takes approximately 80,000 Earth years for GU Psc b to make a complete orbit around its star! The researchers also took advantage of the large distance between the planet and its star to obtain images. By comparing images obtained in different wavelengths (colours) from the OMM and CFHT, they were able to correctly detect the planet.

“Planets are much brighter when viewed in infrared rather than visible light, because their surface temperature is lower compared to other stars,” says Naud. “This allowed us to indentify GU Psc b.”

Knowing where to look

The researchers were looking around GU Psc because the star had just been identified as a member of the young star group AB Doradus. Young stars (only 100 million years old) are prime targets for planetary detection through imaging because the planets around them are still cooling and are therefore brighter. This does not mean that planets similar to GU Psc b exist in large numbers, as noted by by Étiene Artigau, co-supervisor of Naud’s thesis and astrophysicist at the Université de Montréal. “We observed more than 90 stars and found only one planet, so this is truly an astronomical oddity!”

Observing a planet does not directly allow determining its mass. Instead, researchers use theoretical models of planetary evolution to determine its characteristics. The light spectrum of GU Psc b obtained from the Gemini North Observatory in Hawaii was compared to such models to show that it has a temperature of around 800°C. Knowing the age of GU Psc due to its location in AB Doradus, the team was able to determine its mass, which is 9-13 times that of Jupiter.

In the coming years, the astrophysicists hope to detect planets that are similar to GU Psc but much closer to their stars, thanks, among other things, to new instruments such as the GPI (Gemini Planet Imager) recently installed on Gemini South in Chile. The proximity of these planets to their stars will make them much more difficult to observe. GU Psc b is therefore a model for better understanding these objects.

“GU Psc b is a true gift of nature. The large distance that separates it from its star allows it to be studied in depth with a variety of instruments, which will provide a better understanding of giant exoplanets in general,” says René Doyon, co-supervisor of Naud’s thesis and OMM Director.

The team has started a project to observe several hundred stars and detect planets lighter than GU Psc b with similar orbits. The discovery of GU Psc, a rare object indeed, raises awareness of the significant distance that can exist between planets and their stars, opening the possibility of searching for planets with powerful infrared cameras using much smaller telescopes such at the one at the Observatoire du Mont-Mégantic. The researchers also hope to learn more about the abundance of such objects in the next few years, in particular, using GPI instruments, the CFHT’s SPIRou, and the James Webb Space Telescope’s FGS/NIRISS. 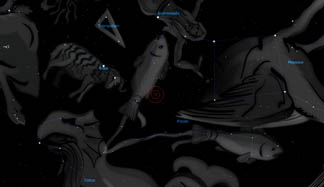 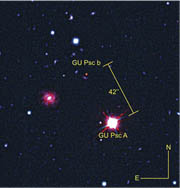 Image 2. The planet GU Psc b and its star GU Psc composed of visible and infrared images from the Gemini South Observatory and an infrared image from the CFHT. Because infrared light is invisible to the naked eye, astronomers use a colour code in which infrared light is represented by the colour red. GU Psc b is brighter in infrared than in other filters, which is why it appears red in this image. 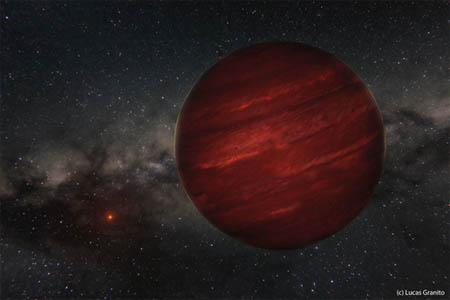 Image 3. Artist’s view of the planet GU Psc b and its star GU Psc. (© Lucas Granito))
About the study

The article Discovery of a Wide Planetary-Mass Companion to the Young M3 Star GU Psc will be published in The Astrophysical Journal on May 20, 2014. The team, led by Marie-Ève Naud, doctoral student at the Department of Physics of the Université de Montréal and member of the CRAQ, consisted mainly of UdeM students and researchers, including Étienne Artigau, Lison Malo, Loïc Albert, René Doyon, David Lafrenière, Jonathan Gagné, and Anne Boucher. Collaborators from other institutions also participated, including Didier Saumon, Los Alamos National Laboratory, New Mexico; Caroline Morley, UC Santa Cruz, California; France Allard and Derek Homeier, Centre for Astrophysical Research, Lyon, France; and Christopher Gelino and Charles Beichman, Caltech, California. The study was made possible with funding from the Fonds de recherche du Québec – Nature et technologies and the Natural Sciences and Engineering Research Council of Canada.

See the article in The Astrophysical Journal

The Centre for Research in Astrophysics of Québec is a partnership between the Université de Montréal, McGill University, and the Université Laval. The CRAQ brings together all researchers working in the field of astronomy and astrophysics of these three institutions, as well as other collaborators from Bishop’s University, the Canadian Space Agency, the Cégep de Sherbrooke, and the private sector (Photon etc., ABB Bomem Inc., Nüvü Caméras). The CRAQ is funded through the program Regroupements stratégiques of the Fonds de recherche du Québec – Nature et technologies (FRQ-NT). The CRAQ constitutes a unique grouping of researchers in astrophysics in Québec bent on excellence and whose varying and complementary fields of expertise allows them to be innovative, creative and competitive in several scientific fields, thus offering graduate students a wide variety of subjects in both fundamental and applied fields of research.