Explore wonders of the cosmos at McGill University 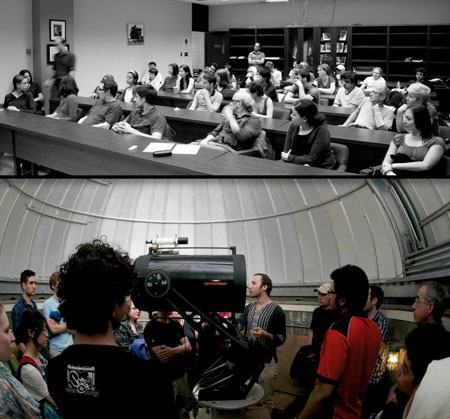 Fascinated by the night sky? Intrigued by the wonders of outer space? A series of public outreach activities organized by the McGill Astrophysics and Cosmology Group now offers the opportunity to learn from researchers about phenomena ranging from the transit of Venus to the evolution of the universe.

Close to 50 people turned out on March 22 for the group’s first “public astro night,” filling a classroom in the Ernest Rutherford Physics Building to hear postdoctoral fellow Ryan Lynch talk about pulsars.

Lynch, a member of Vicky Kaspi’s McGill Pulsar Group, explained what pulsars are and why they’re so scientifically interesting. Pulsars are rapidly rotating neutron stars with periods between milliseconds to a few tens of seconds, producing a periodic signal, like the beam of a lighthouse.

After Lynch finished fielding questions, visitors had a guided tour of the experimental astrophysics laboratory. Some then climbed to the roof of the Rutherford building to check out the MacPherson Observatory and its powerful telescope.

An overcast sky made it impossible to stargaze immediately after the lecture broke up, around 8 p.m. But the several enthusiasts who lingered were rewarded as the sky cleared about an hour later, unveiling views of Jupiter, Venus, Mars and the Orion Nebula.

The Astrophysics and Cosmology Group at McGill is part of the Centre de Recherche en Astrophysique du Québec. The group, consisting of eight faculty members, close to 30 grad students and more than 10 post-docs, researches a broad array of topics touching on many fields of astronomy, astrophysics and cosmology.

The next astro night is expected to be held during the week of April 16. Members of the group also have begun recording and posting a series of podcasts with visiting astrophysicists discussing their research in non-technical terms. To access the podcasts and learn more about the outreach events, visit:
http://www.astro.physics.mcgill.ca/outreach.php.