Discovery of the candidate most massive star

An international research team, that includes Anthony Moffat, Professor Emeritus at the physics department of the Université de Montréal and member of the CRAQ, observed a binary star which birth mass was of the order of 300 to 400 times the mass of our Sun. The current total mass of the binary system composed of two stars is estimated to be about 200-300 times the mass of the Sun, according to massive stars evolution models. The unexpected mass makes this duo the most massive binary star system known to date.

The binary system, named R144, is located on the outskirt of a star formation region called Tarentula Nebula (or 30-Doradus) in the Large Magellanic Cloud, a satellite galaxy orbiting our Milky Way, that can be seen from the southern hemisphere. In the centre of this star formation region, astrophysicists know of a large population of very bright stars with very peculiar spectroscopic properties unique to the class of Wolf-Rayet stars. These are young and massive stars that are losing part of their mass due to strong stellar winds. Some of these sometimes have masses larger than 220 times the mass of our Sun. R144 is the brightest star of 30-Doradus in the visible part of the electromagnetic spectrum, but it also shines intensively in the x-ray domain. This duality is evidence of a binary system that was later confirmed by a detailed spectroscopic study.

The spectrum of R144 was acquired by the instrument X-shooter at the Very Large Telescope of the European Southern Observatory in Chile. It is one of the most-sensitive spectrograph ranging from ultraviolet light to infrared. Without this instrument that allows the acquisition of the whole spectrum at once, the study performed would have been much more difficult.

The team now tries to determine whether R144 is a runaway binary star (a star moving through space at high velocity compared to the rest of the surrounding stars) with additional observations. These will also determine the masses and physical properties and will confirm if R144 is the most massive star known to date.

The work is published in the journal Monthly Notices of the Royal Astronomical Society Letters, available at the address: 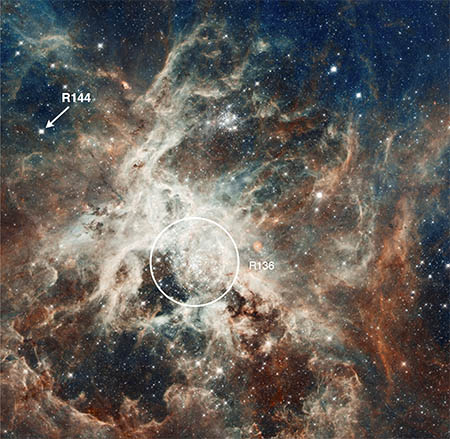 Illustration: Hubble Space Telescope image of the star formation region in the Large Magellanic Cloud. The arrow indicated the position of the binary system R144, and the circle indicated the star cluster R136