Dorian Pirot is the recipient of the 2012 Eurêka! public prize from the ACFAS

Dorion Pirot is the recipient of the 2012 Eurêka! public prize from the Association Francophone pour le Savoir (ACFAS) for his scientific illustration of the magnetic Sun. The Sun is an immense sphere of highly-conducting gas. Because of the high temperature of the Sun, the gas is in a plasma form where the electrons are separated from the ions. In addition, large magnetic fields from the interior of the star can channel the radiation emitted by the gas. The displacement of the magnetic fields from the inside toward the outer layers of the Sun explains the enhanced activity of the Sun on the surface. Heated by these large magnetic fields, the plasma can follow magnetic loops above the solar surface (inside the small box on the right). In the large box, the loops are modeled from observations of the solar surface, by solving magneto-hydrodynamic fluid equations. This work can help with the understanding of the processes leading to the magnetic fields emerging from the deeper layers of the Sun. 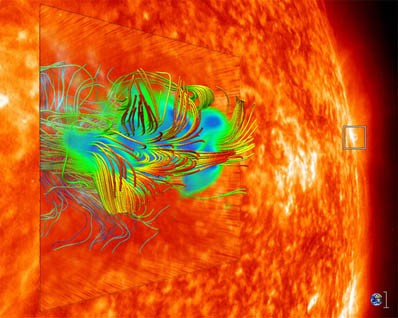 The researchers aim at predicting the magnetic activity of the Sun in order to anticipate solar eruptions, since these cataclysmic phenomena have an impact of the regions located near the Terrestrial magnetic poles. This is true for the province of Quebec where the communication and electric networks are often affected.

The contest of the ACFAS is rewarding illustrations obtained from scientific research, in all fields of Science. It is open to all individuals or groups, performing research in a public or private institution. The goal of this price is to put forward scientific imaging and to stimulate the interest and the curiosity of the public for scientific research. It also aims at developing a database of scientific images from research performed in Quebec.

The CRAQ congratulates Dorian Pirot for this prize