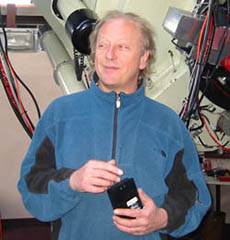 The first edition of the UdeM Principal’s Award was attributed to the administrative and support staff members of the Université de Montréal (UdeM). The ceremony was held on June 5th 2012, at the cafeteria Chez Valère on the UdeM campus, with the university Principal Guy Breton, and the Human Resources Vice-Principal, Anne-Marie Boisvert.

Bernard Malenfant, telescope operator at the Observatoire du Mont-Mégantic since its creation, received the Dedication Prize (“Prix Engagement”, in french) for his long term actions benefiting the community at large. Mr. Malenfant is one of the volunteer behind the Astronomy Popular Festival, an annual event created in 1982. In 1989, he also created the Fondation d’Astronomie du Québec, which led to the opening of the ASTROLab in 1996

The Principal’s Awards were initiated by Guy Breton who wishes to emphasize the importance of the administration and support staff for the teaching and research mission of the university: “With your collective efforts, the Université de Montréal ranks in the first percentile of the world’s best universities. This is why I created the principal’s awards: because I am proud of this University; because I am proud of the people in the University community.

The CRAQ congratulates Bernard Malenfant for this award.

For a short biographic video about Bernard Malenfant, click here:http://youtu.be/F3DqKaR9oFc