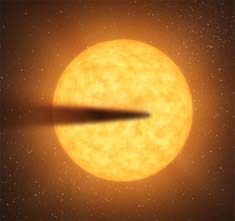 A research team led by researchers from the MIT and NASA, including two researchers from the CRAQ (Bishop’s University and Université Laval), demonstrated the upcoming disintegration of a planet around its host star. This cataclysmic event, which will happen in the next 100 millions of years, was evidenced by data from the Kepler space telescope and the telescope at the Observatoire Mont-Mégantic.

The planet, located about 1500 light years from our Solar System, seems to be evaporating under the strong solar winds from the host star. This small planet, barely larger than Mercury in our Solar System, behaves similarly to a comet, with a long tail of dusts and debris caused by the stellar blow from the star KIC 12557548.

The team of researchers from the MIT (Massachusetts Institute of Technology) and from NASA discovered the planets, using the Kepler space telescope, and deduced its properties using sophisticated photometric methods. The small planet is very intriguing because of its very small orbital period (it goes around the host star once every 15 hours), and its great proximity to the star. Under these two conditions, the planet is heated to high temperatures by the parent star KIC 12557548. To determine the unknown properties of the star, the researchers called in collaborators from the Centre de Recherche en Astrophysique du Québec (CRAQ) and from the Observatoire Mont-Mégantic (OMM).

Despite its modest size, the telescope at the OMM is equipped with cutting-edge instruments, including a spectrograph designed, partly, to understand the properties of stars. Solicited by the MIT/NASA team, Prof. Lorne Nelson from Bishop’s University, and PhD student Laurie Rousseau-Nepton from Université Laval, acquired spectral data at the OMM, despite the relatively low brightness of the star. By comparing the obtained spectra to theoretical models, the researchers determined the properties (mass, temperature, and stellar type) of the star KIC 12557548.

Illustration: Artistic representation of the planet disintegrating in front of its star.

← Researchers from the CRAQ discover a galaxy-packed filament using data from the Herschel Space Observatory
After the Canadarm, the Canadeyes for the future Webb Telescope →