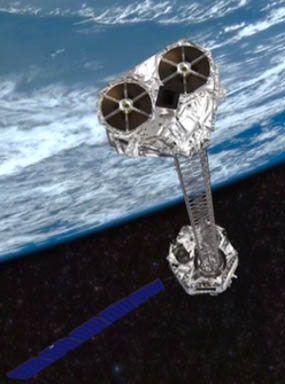 NASA is making final preparations to launch its Nuclear Spectroscopic Telescope Array, NuSTAR. The mission, which will use X-ray vision to hunt for buried black holes, ultra-dense neutron stars, and supernova remnants, is scheduled to launch no earlier than June 13. Prof. Victoria Kaspi, from McGill and the CRAQ, leads to galactic science team to ensure NuSTAR telescope points to the most exotic objects in the Milky Way.

Victoria Kaspi is the Lorne Trottier Chair in Astrophysics, the Canada Research Chair in Observational Astrophysics, Professor of Physics at McGill University, and member of the Centre de Recherche en Astrophysique du Québec. She is among the key NuSTAR team members. In her position of Galactic Science Team Lead, Kaspi is responsible for ensuring the new space telescope points at the most intriguing objects in the Milky Way.

Kaspi and her McGill team look forward in particular to using NuSTAR to study, among other things, magnetars, the most highly magnetized stars known in the Universe.

NuSTAR will be the first space telescope to create focused images of cosmic X-rays with the highest energies. These are the same types of X-rays that doctors use to see your bones, and airports use to scan your bags. The telescope will have more than 10 times the resolution (ability to see details), and more than 100 times the sensitivity, of its predecessors operating in a similar energy range.

About NuSTAR
Studying black holes that are big and small, far and near, NuSTAR will endeavor to answer questions about the formation and physics behind these wonders of the cosmos. The observatory will also investigate how exploding stars forge the elements that make up planets and people, and it will even study our own sun’s atmosphere.
NuSTAR is a Small Explorer mission led by the California Institute of Technology in Pasadena and managed by NASA’s Jet Propulsion Laboratory, also in Pasadena, for NASA’s Science Mission Directorate in Washington. The spacecraft was built by Orbital Sciences Corporation, Dulles, Va. Its instrument was built by a consortium including Caltech; JPL; the University of California, Berkeley; Columbia University, New York; NASA’s Goddard Space Flight Center, Greenbelt, Md.; the Danish Technical University in Denmark; Lawrence Livermore National Laboratory, Livermore, Calif.; and ATK Aerospace Systems, Goleta, Calif. NuSTAR will be operated by UC Berkeley, with the Italian Space Agency providing its equatorial ground station located at Malindi, Kenya. The mission’s outreach program is based at Sonoma State University, Rohnert Park, CA. NASA’s Explorer Program is managed by Goddard. JPL is managed by Caltech for NASA.

← The Transit of Venus in front of the Sun: Clouds did not spoil the show!
Researchers from the CRAQ discover a galaxy-packed filament using data from the Herschel Space Observatory →