MONTREAL, January 7, 2014 – After nearly a decade of development, construction, and testing, the world’s most advanced instrument for directly imaging and analyzing planets around other stars is pointing skyward and collecting light from distant worlds. The instrument, called the Gemini Planet Imager (GPI), was designed, built, and optimized for imaging faint planets next to bright stars and probing their atmospheres, and studying dusty disks around young stars. It is the most advanced such instrument to be deployed on one of the world’s biggest telescopes – the 8-meter Gemini South telescope in Chile.

GPI: an international collaboration
GPI is an international project led by the Lawrence Livermore National Laboratory (LLNL) under Gemini’s supervision, with Bruce Macintosh as Principal Investigator and LLNL engineer David Palmer as project manager. Scientists at the American Museum of Natural History, led by Ben Oppenheimer, designed special masks that are part of the instrument’s coronagraph which blocks the bright starlight that can obscure faint planets. Engineer Kent Wallace and a team from NASA’s Jet Propulsion Laboratory constructed an ultra-precise infrared wavefront sensor to measure small distortions in starlight that might mask a planet.

A team at the University of California Los Angeles’ Infrared Laboratory, under the supervision of Professor James Larkin, together with Rene Doyon director of the Observatoire du Mont-Mégantic (OMM), professor at the Department of physics at University of Montreal (UdeM) and Simon Thibault professor at Université Laval (UL) developed the infrared spectrograph that dissects the light from planets. Immervision (Montreal) led the fabrication of the cryogenic optical train in close collaboration with INO (Québec) and the OMM personnel.

Data analysis software written at the UdeM, the Dunlap Institute in Toronto and the Space Telescope Science Institute assembles the raw spectrograph data into three-dimensional cubes.

NRC Herzberg in British Columbia Canada, built the mechanical structure and software that knits all the pieces together. James R. Graham, as project scientist, led the definition of the instrument’s capabilities. The instrument underwent extensive testing in a laboratory at the University of California Santa Cruz before shipping to Chile in August. The SETI institute in California manages GPI’s data and communications.

GPI: a unique tool to see exoplanets
GPI detects infrared (heat) radiation from young Jupiter-like planets in wide orbits around other stars, those equivalent to the giant planets in our own Solar System not long after their formation. Every planet GPI sees can be studied in detail.

“Even these early first-light images are almost a factor of 10 better than the previous generation of instruments. In one minute, we are seeing planets that used to take us an hour to detect,” says Bruce Macintosh of the Lawrence Livermore National Laboratory who led the team that built the instrument.

GPI carried out its first observations last November – during an extremely trouble-free debut for an extraordinarily complex astronomical instrument the size of a small car. “This was one of the smoothest first-light runs Gemini has ever seen” says Stephen Goodsell, who manages the project for the observatory. For GPI’s first observations, the team targeted previously known planetary systems, including the well-known Beta Pictoris system; in it GPI obtained the first-ever spectrum of the very young planet Beta Pictoris b.

The GPI Survey
In 2014, the GPI team will begin a large-scale survey, looking at 600 young stars to see what giant planets orbit them. GPI will also be available to the whole Gemini community for other projects, ranging from studies of planet-forming disks to outflows of dust from massive, dying stars.

“The first GPI images are just superb! We have waited for this moment for so many years” says René Doyon of UdeM, member of the GPI science team who has been closely involved in the development of GPI. “GPI is a revolution, we have demonstrated the ability of detecting planetary systems in a record time”, said Christian Marois, an astronomer at the National Research Council of Canada- Herzberg, also member of the GPI science team and leader of the discovery of the first multiple planetary system in 2008 together with professors René Doyon and David Lafrenière from UdeM.

“Some day, there will be an instrument that will look a lot like GPI, on a telescope in space,” Macintosh projects. “And the images and spectra that will come out of that instrument might show a little blue dot that is another Earth.” 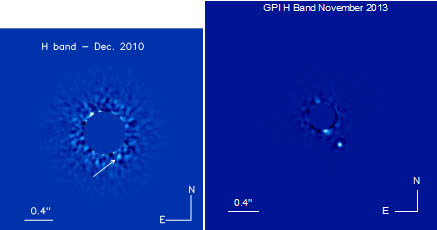 Left: NICI 4000-second exposure of Beta Pictoris. Right: 900-second Gemini Planet Imager’s first light image of Beta Pictoris b, a planet orbiting the star Beta Pictoris. In addition to the image, GPI obtains a spectrum from every pixel element in the field of view to allow scientists to study the planet in great detail.

Beta Pictoris b is a giant planet – several times larger than Jupiter – and is approximately ten million years old. These near-infrared images (1.5-1.8 microns) show the planet glowing in infrared light from the heat released in its formation. The bright star Beta Pictoris is hidden behind a mask in the center of the images; a few scattered starlight artifacts, called ‘speckles,’ are also visible, but vastly fewer than in previous images.

Notes
The University of Montreal is officially known as Université de Montréal.