After the Canadarm, the Canadeyes for the future Webb Telescope 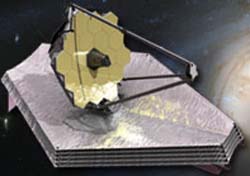 Two instruments whose development was led by by the University of Montreal’s Professor René Doyon, known by the acronyms NIRISS and FGS, will be integrated into the James Webb Space Telescope (JWST or Webb for short) that will replace Hubble in 2018. The twin instruments leave Canada today and will arrive at NASA at the end of July. « NIRISS will be involved in the discovery and study of Earth-sized exoplanets and the most distant galaxies whilst FGS will have the critical task of ensuring that Webb is precisely aimed at its target, 1.5 million km from Earth,” said Professor Doyon, from the physics department of l’Université de Montréal, Director of Mont-Mégantic Observatory and member of the Centre for research in astrophysics of Quebec (CRAQ)

The Webb is a joint project between the American (NASA), European (ESA) and Canadian (CSA) space agencies. The launch date is scheduled for 2018. The telescopes’ mission will be to study the stars and galaxies dating back to the time they formed a few hundreds millions after the Big Bang and it will also search for planetary systems capable of supporting the development of life. Webb will be the successor of the well known Hubble telescope that was launched 22 years ago. “Unlike Hubble, whose orbit is 400 km from Earth’s surface, Webb will be positioned 1.5 million km from our planet – that’s five times the distance between Earth and the Moon,” explained Professor Doyon. “At this distance, its instruments will be in a stable and extremely cold environment. In fact, as it is protected from the sun by a sunshield the size of a tennis court, Webb and its instruments will be cooled to -230 degrees Celsius, which enable it to attain unparalleled levels of sensitivity.”

The Fine Guiding Sensor (FGS) and Near InfraRed Imager and Sitless Spectograph (NIRISS) are the result of efforts undertaken by scientific teams that were lead by Professor Doyon and Dr. John Hutchings of the National Research Council Canada (NRC). The instruments were mostly constructed by COM DEV International, a private company based in Ottawa and Cambridge, Ontario, world leader in the design and construction of space technology. UdeM and the NRC contributed to the conception and testing of several components of the instruments. The partnership between the CSA, COM DEV and the scientific teams affiliated with the NRC and the University of Montreal has pushed the boundaries set by current technology through scientific innovation. Moreover, the partnership has guaranteed that Professor Doyon and other Canadian astronomers will have access to precious observing time once the Webb is in operation.

FGS: Redefining precision
The two « eyes » of the FGS are key parts of the Webb. The FGS will be nothing less than the telescopes “steering wheel,” enabling it to remain pointed at objects with immense precision in order to ensure that the Webb’s images remain sharp. More specifically, FGS will enable the Webb to point in the direction of an object with a precision reaching one-millionth of a degree. That would be, for example, the angle formed by the diameter of quarter located in St John’s, Newfoundland if it was seen from Montreal, or the width of a hair seen from 5 km away.

NIRISS: The next step for Professor Doyon’s work will be in Space

Housed within the same platform as the FGS, NIRISS will be one of Webb’s four scientific instruments. It will search for faintest and most and distant galaxies fomred eearly in the universe. Its spectroscopic sensitivity in the infrared will also be a crucial capability for Professor Doyon’s specific field of research: exoplanets. Already a leader in the field, having notably participated in capturing the first image of an exoplanet system, Doyon and his team specifically designed and optimized NIRISS so that it could detect the fine atmosphere of Earth-sized exoplanets. It could also determine the composition of these atmospheres: whether they contain water vapor, carbon dioxide and potentially some biomakers such as methane or oxygen that could suggest the presence of life. NIRISS will, in other words, have the ability to unveil other worlds that could potentially be inhabitable. “It has taken us more than ten years to develop and build this incredible machine… that weighs no more than a person,” said Professor Doyon. “There are no words to describe my excitement of seeing our instrument finally being shipped to NASA. The whole team just can’t wait to see it on orbit and in operation.”

FGS/NIRISS will arrive at NASA’s Goddard Space Flight on July 30, 2012. A long series of tests and integration operations with the rest of the telescope will then follow, culminating in the launch of the Webb in 2018. The first data will arrive a few months later.

Note:
The University of Montreal is officially known as Université de Montréal. Journalists are encouraged to use our official name where their editorial guidelines will permit it. 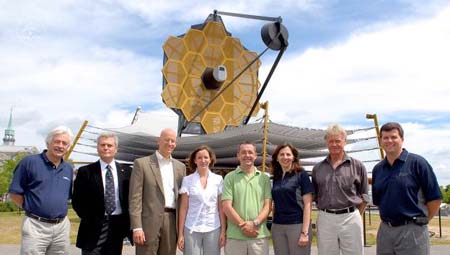 A replica of the Webb Space Telescope in Old Montreal, with the principal project researchrs. (Professor René Doyon is fourth from the right).

About the CRAQ :
The Centre for Research in Astrophysics of Québec (CRAQ) is a partnership between the Université de Montréal, McGill University, and the Université Laval. The CRAQ brings together all researchers working in the field of astronomy and astrophysics of these three institutions, as well as other collaborators from Bishop’s University, the Canadian Space Agency, the Cégep de Sherbrooke, and the private sector (Photon etc., ABB Bomem Inc., Nüvü Caméras). The CRAQ is funded through the program Regroupements stratégiques of the Fonds de recherche du Québec – Nature et technologies (FQRNT). The CRAQ constitutes a unique grouping of researchers in astrophysics in Québec bent on excellence and whose varying and complementary fields of expertise allows them to be innovative, creative and competitive in several scientific fields, thus offering graduate students a wide variety of subjects in both fundamental and applied fields of research.

← The Observatoire Mont-Mégantic and researchers from the CRAQ witness the upcoming disintegration of a planet
The Faculté des Etudes Supérieures et Postdoctorales (FESP) of the Université de Montréal (UdeM) awarded the 2012 prize for the best doctorate thesis in fundamental sciences. →